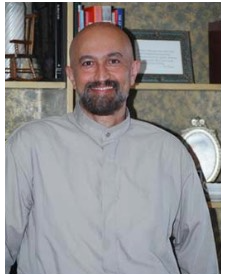 “A Life-altering Experience with a Unique and Gifted Healer”, by Joanna Chieppa

Since 1982 I have been drawn to studying healers and healing.  I have been fortunate to have taken workshops with and received healing sessions from some nationally and internationally known energy healers.  I have also taught Therapeutic Touch in hospitals, hospices, nursing schools and massage schools since 1986.

But nothing in my years of study really prepared me for meeting Behrooz Danadoost.

When I became seriously ill over a year ago, I immediately turned to “alternative” and energy medicine. I saw an acupuncturist, naturopath, osteopath, craniosacral therapist and several experienced energy practitioners.  Despite their truly good work, my condition worsened.  I was unable to eat solid food, lost weight rapidly, had pain everywhere, and slept only 2-3 hours a night.  I was also having anxiety attacks, dizziness, rapid heartbeat, tremendous fatigue and weakness, hair loss and more.  Eventually I was not only unable to work, but barely able to function.  I also saw a number of medical doctors and had many diagnostic tests.  When neither alternative or allopathic practitioners were able to fully diagnose me or help me significantly, I began to lose hope.  I had lost 72 pounds, and I could feel that my life force was rapidly fading.

Then an acquaintance mentioned a healer that a friend of hers had seen.  It wasn’t a strong recommendation, and I wasn’t particularly interested.  I often felt wonderful after energy healing, but then all my symptoms would just come back.  Plus I had tried so many good practitioners that I had just about given up hope.  But for some reason, as my health continued to fail, his name kept coming into my mind.  So I called his clinic and was sent a number of testimonials. One after another, these letters told of serious and even life- threatening conditions that had been healed through the intervention of a Mr. Behrooz Danadoost, and I decided to make an appointment.

The strongest memory of the first time I saw him was of a deep and all encompassing kindness.  Words are really inadequate to describe the beauty and safety of his presence.  I felt like someone who had been lost in a stormy sea and finally sees a rescue boat.  Behrooz was confident that he would be able to help me and kept reassuring me that I would be fine.  The result of the first sessions felt to me like reconnecting with my soul.  As we continued, he began to restore the functions of my physical body and my mind.  Through hands-on healing and guided meditations, he was not only healing me, but guiding me to let go and continue to heal myself.  As time went on, I also began to learn about his own fascinating story.

A remarkable healing journey began for Behrooz when he was diagnosed with leukemia in 1989.  He suffered intense side effects from chemotherapy, including grand mal seizures so violent that they caused multiple broken vertebrae, crushed vertebrae and broken ribs.  Over the next few years he was also treated with bone marrow transplants and blood transfusions and developed hepatitis B.

On a trip to Iran in 1993, through an unexpected and amazing series of events, he was introduced to Grand Master Healer Ostad Parvarandeh.  At that time Master Parvarandeh was so sought after as a healer that people slept in the streets waiting for hours for a chance of seeing him.  In later years, Ostad relocated to California where his healings were observed and tested by numerous research institutes including Stanford University, as well as by Dr. C. Norman Shealy, the well-known neurosurgeon who founded the American Holistic Medicine Association, and who has studied many clairvoyants and healers.  In his book “Sacred Healing,” Shealy published the results of research that showed measurable positive changes in DHEA levels, EEG and cardiac output.  These kinds of positive changes were seen even in instances where Ostad was doing distant healing and the patients were many miles away.  I have studied with Dr. Shealy and remember him saying that Master Parvarandeh was the most powerful healer he had ever seen.

During this first meeting, Ostad showed him the light.  Behrooz experienced what he calls “instantaneous spiritual combustion” enabling him to suddenly let go of all old solid fixations and his “three magic words: logic, logic, logic!”  Also, for the first time, he realized that he was clairvoyant.  In Ostad’s presence he was totally transformed.  Behrooz came back to the US but felt compelled to go back to Iran and be with Master Parvarandeh.  The healer became his mentor.  For forty days he observed everything about Ostad.  Not only his incredible healing feats, but also how he spoke, walked, ate and slept.  During their time together Ostad Parvarandeh healed him of leukemia and hepatitis B.

When he returned to California, doctors at UCSF were astounded with his progress, and could find no sign of the hepatitis B virus. Behrooz then closed his business in San Francisco, announced that he was beginning his practice as a healer, and waited for patients to arrive.  Master Parvarandeh had forbidden him to even have a business card, yet with no advertising at all, he became so busy that he even worked nights.

In 1994, a Bay area radio station invited him to do a show where people would call in for diagnosis and distant healing, and he had agreed.  One day, while he was meditating on this new venture, he had another unexpected and life-altering experience.  He says: ” as I was sitting in a meditative state with eyes open, a hugely intense column of light whirled into my room.  The intense column of light began to transform into an angel-like figure with wings.  The embodiment of light quickly shaped into a very tall human form almost ten feet with his upper part bent on the ceiling.  The two wings also changed into two human-like figures about seven feet tall who seemed to be guarding the main body of light which now clearly had a very familiar face, and extremely kind but penetrating eyes.  His long hair and beard had golden violet sparks.  I’m not sure how long we spent together or what language we spoke, but I got a clear message to cancel the radio show and instead to begin working with terminally ill patients!”

The next day he cancelled the show and began immediately calling hospices offering to help their patient free of charge.  Unfortunately, nobody was interested.  He says: ” I was so extremely disappointed.” But somehow the following morning he began receiving calls from terminally ill patients.  The next thing he knew, he was doing healing sessions with five new patients each of whom had been given only a few days to live.  As a result, all five lived much longer than expected, and some of them are still alive today.  And, in every session with these patients, the embodiment of light and his bodyguards were present.

As Ostad Parvarandeh had predicted in 1993, he crossed over in October of 1997.  This marked another turning point in Behrooz’s life. Since then Master Parvarandeh has been constantly with him in his work with patients.  Behrooz says: “he is present in every one of my healing sessions, guiding and helping and reassuring.”

For almost 9 years now, Behrooz Danadoost has had a successful and very full-time healing practice.  He founded the Healing Renaissance Clinic in Novato, California, where he has healed people of many physical and mental illnesses including asthma, esophageal cancer, fibromyalgia, leukemia, lupus, thyroid imbalance, and rheumatoid arthritis to name just a few.  The kind of healing he does is able to create profound physical changes.  He is able, for example, to regenerate bone, restore the original consciousness of an afflicted area, and shrink or dissolve tumors and cysts.  In addition to using energy to make physical change, he can heal mental and emotional conditions and can repair and enhance the aura, chakras, and meridian flows.  He does this through both hands-on healing and distant healing sessions.

There are many kinds of energy work where the practitioner acts as a conduit for energy, or removes energy blocks or brings internal energy flows/meridians into balance.  All of these are valid and have been helpful for many people.  I myself have practiced a number of energy-based modalities.  So I intend no disrespect when I say that the healing Behrooz does goes far beyond these.

In addition to his hands-on work, Behrooz uses beautiful meditations to assist in the release of stagnant energies and patterns of belief and thought.  These meditations can also help the patient learn to increase the inflow of healthy energy, change their blueprint or genetic tendencies, remove the frequencies of fear, keep thoughts under control, create a moving sanctuary/shield and more.  These are all meditations that he has created.  Some use familiar imagery, but some are different than anything I’ve ever experienced, and all are powerful and effective.  Using these meditations can assist those who are in the healing fields to help others more effectively, as well as helping them to avoid the tendency to be adversely affected by the illnesses and attitudes of their clients.

Until now, he has only shared this information with private patients and members of local cancer survivor groups.  Now he intends to share his meditations and knowledge of healing with a wider range of people by offering a series of workshops.  The workshops will be especially helpful for doctors, nurses, naturopaths, bodyworkers, psychotherapists, and other healing professionals, but everyone is welcome and no prior experience is necessary.  It will be a unique opportunity to meet this exceptional healer.

This has been the first opportunity I have had to personally experience the work of a master healer on an ongoing basis.  The results have been profound.  I can now eat and digest solid foods, have gained 20 pounds, am sleeping better, have localized discomfort rather than widespread severe pain, and have more physical strength and vitality.  My hair is no longer falling out, my mind is clearer and memory is much improved. I look (and feel) years younger, and am calmer and much happier.  More than just regaining my health, I am regaining the best and brightest aspects of myself; some of which have been hidden or forgotten for years.

Behrooz Danadoost stands out as one of the most skillful healers and compassionate human beings I have ever met.  I have been consistently impressed with his abilities, his knowledge, and his integrity.  I am made humbly aware, in the face of what I am learning from him, how much more there is to know about energy and healing.

Back to Master Danadoost’s Page