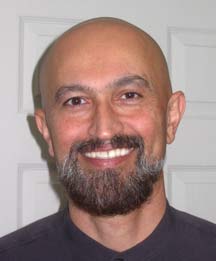 Grand Master Danadoost was afflicted with leukemia in 1989.  The side-effects of chemotherapy drugs were immense. Less than six months after receiving chemo at UCLF, he had grand mal seizures so violent that they caused multiple broken vertebrae, crushed vertebrae and broken ribs.  Over the next few years he was also treated with bone marrow transplants and blood transfusions and developed hepatitis B.

During the forty days of being with the Grand Master Healer, Ostad Parvarandeh healed his leukemia and hetatitus type B. “At UCSF, the physicians were astounded with my progress and that there were no signs of the Hepatitus B virus”.   Finally, Ostad showed him the light.  Master Danadoost went into sudden spiritual combustion and was able to let go of his old solid fixations and his three magic words. Logic, logic, logic!  Ostad’s presence made him realize for the first time that he was clairvoyant.

This period marked a profoundly transforming direction in his life.  He came back to the U.S and closed his business in downtown San Francisco, announced that he was a healer and sat home waiting for the patients to arrive with no advertising at all since Master Parvarandeh could see no reason why he should have a business card.  Soon thereafter, he became so busy that it required him to even work nights!

October 15, 1997 marked another turning point in Master Danadoost’s life.  Exactly as Master Parvarandeh predicted in 1993, he crossed over.

“Ever since he crossed over, he is present in every one of my healing sessions; guiding, helping and reassuring.  Thank you Ostad.  I am eternally grateful”